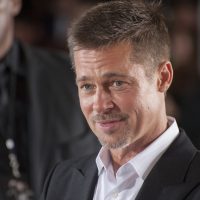 Leonardo DiCaprio got people talking about his new movie with Brad Pitt, but probably not in the way he envisioned.

The two actors star in Quentin Tarantino’s forthcoming film, “Once Upon a Time in Hollywood,” which is set in 1969 and centers on a former star of Westerns and his longtime stunt double.
On Monday, DiCaprio shared a poster from the film on Instagram that showed him with his co-star, dressed in character and looking rather retro.