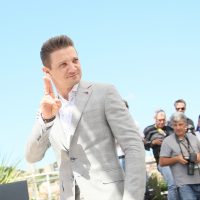 Now that she’s a full-fledged movie star, Lady Gaga is getting close with Hollywood A-listers — and one of them is Jeremy Renner!

The singer, 32, and the actor, 48, have been spending time together, a source tells PEOPLE.

PEOPLE has reached out to both of their reps for comment.

The Oscar winner and the Avengers actor do share a love of music.

Renner wrote songs for the animated film Arctic Justice: Thunder Squad in which he also voiced the fox named Swifty. Last year, he told USA Todaythis link opens in a new tab he had practiced “music since I was 12, I just didn’t want to do it as a business.”

“It’s not like I’m dropping an album or anything like that, [but it’s] a different type of music than I’d typically write, so I love that challenge,” he said.

The news of their sighting comes after Lady Gaga‘s split from fiancé Christian Carino in February after two years together.

“It just didn’t work out. Relationships sometimes end,” a source told PEOPLE at the time, adding that the pair split “a bit ago. There’s no long dramatic story.”

Since then, the singer has faced speculation about her chemistry with her A Star Is Born costar and director Bradley Cooper after a passionate Oscars performance.

“Yes, people saw love and guess what? That’s what we wanted you to see,” she said. “[‘Shallow’] is a love song, A Star is Born is a love story. It was so important to both of us that we were connected the entire time… When you’re singing love songs, that’s what you want people to feel.”

Lady Gaga also recently shut down pregnancy rumors on Twitter and confirmed she’s working on a new album — her first since Joanne in 2016.