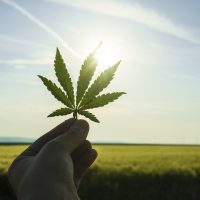 MADISON, Wis. – Marijuana in Wisconsin is illegal to have, but one church that recently opened its doors on Mifflin Street said yes we cannabis.

To be blunt, the church, known as the Lion of Judah House Rastafari, was made possible through the joint effort of Jesse Schworck and Dylan Bangert. Both said the First Amendment and the Religious Freedom Restoration Act protects them and allows them to use marijuana as part of their religious practice.

The First Amendment states that Congress shall make no law respecting an establishment of religion or prohibiting the free exercise thereof. Schworck said he knows his rights and said using cannabis is how people in the Rastafarian religion weed out the bad.

“This is a non-profit church,” Schworck said. “We all use cannabis to meditate and also for the religious purpose for uplifting our mind and our body and our spirit.”

Cannibis is used as a religious sacrament. You can’t just roll up and buy it. You have to be a member of their church and make donations to them. Schworck made it clear that they do not sell it and it cannot be gifted to the public.

“We just want people to be sincere in that aspect of the religion,” Schworck said. “We don’t have to agree on everything. We are open. We are all denominational so you can come as you are. Be yourself, share your stories and the things you know. We don’t have a monopoly on knowledge or anything like that. We just try to encourage people to talk and have fellowship together and break bread.”

To become a member of the church, you can sign up online or in person and fill out a membership card that makes a promise regarding your sincerity.

“This card is the membership. People have to be sincere and they have to be legitimate and agree that they use it for sacrament,” Schworck said.

Many people ask if this is legal. According to the Pew Research Center, in 2006, the Supreme Court ruled that a religious group can use an illegal drug in their worship services.

Schworck has a document from the state of Wisconsin that legitimizes them as an organization.

The Department of Justice was contacted to ask about their take on the legality of it. They have not responded to our request for comment.

The inside of their building, located at 555 West Mifflin St., is bare as they prepare to stock it with inventory and space to practice their religion.

Schworck said in the next month or so, they will have a fully prepared church with marijuana infused coffee, tea, edibles, oils and more for their religious practices.

Just like any church, anyone can join. They will be open for those who want to come learn about the Rastafari religion, read books on the religion and meditate.