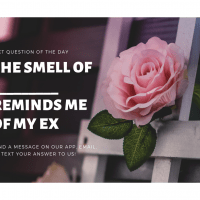 Ohhhhh oh, that smell.  Can you smell that smell?  We want to know what your ex smells like, figuratively or actually!

TEXT QUESTION OF THE DAY:The smell of BLANK reminds me of my ex