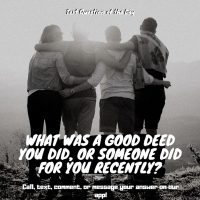 We are seriously hoping that we have some nice listeners because if we don’t then this #TQOTD is gonna be a big loser…  So, let’s see what you said!

TEXT QUESTION OF THE DAY:What was a good deed you did, or someone did for you recently?