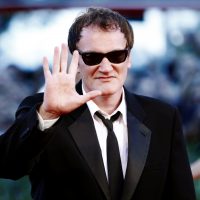 Quentin Tarantino has a new rule for being on set during his films — put the cell phones away!

In an interview on The Rich Eisen Show, actor Timothy Olyphant — who plays real-life actor James Stacy in Tarantino’s upcoming film Once Upon a Time in Hollywood  — revealed that the famed film director had a policy of no cell phone use during filming.

“His set is a set unlike anything I have ever been on,” Olyphant, 51, said of the 56-year-old’s on-set policy.

“Quentin has got no cell phones on set. None. You’re fired. Cell phone…out, done, you’re going home,” he added.

The Santa Clarita Diet actor went on, explaining that Tarantino had a booth set up for the cast and crew to check their phones in upon arriving on set each day.

“If you needed to make a phone call, you go out on the street and make a phone call,” Olyphant added. However, from his perspective, the rule wasn’t implemented to stop people from taking pictures or videos at the studio.

As Olyphant calls it, the rule was one of the “greatest gifts that he gave the entire crew and actors.”