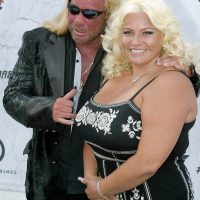 Earlier on Wednesday, Duane “Dog” Chapman revealed in a tweet that his wife Beth Chapman had died after battling stage II throat cancer

Dog the Bounty Hunter is mourning the loss of his wife.

Hours after announcing that his wife Beth Chapman had died from stage II throat cancer in Hawaii, the reality star, whose real name is Duane Chapman, spoke to local reporters on Wednesday about the “unexpected” and sudden loss and how he’s been coping.

“It’s terrible, the most terrible time in someone’s life,” he told Hawaii News Now alongside his two daughters. “You kind of try to remember that you’re celebrating life, but right now we’re mourning the death, so it’s not good.”

“The cancer gig, of course, we’ve gotta find a cure,” he added, “because all we have now is some get lucky, but most pass away.”

As he opened up about the emotional day, Dog tearfully revealed that his wife’s final words were not about her, but rather ensuring that her family was okay.

“When she had an attack I didn’t know anything to do but to say ‘in Jesus’ name’ and hold her and when I said ‘in Jesus’ name’ she said, ‘Say it again, say it more,’” Dog recalled. “And then she told the girls and everybody, with her mouth — she came out of it a couple times — ‘I love you’ and ‘Are you guys all okay? Don’t worry,’ but she never accepted it.”

“So amazing, this is totally unbelievable,” he added.

Remembering his wife, Dog noted how Beth fought until the very end and insisted on beating the cancer diagnosis in her own way. He also shared how Beth had sweetly left him notes to find around their home together after she had died.

“Beth was somewhat of a control person — not from the grave but from heaven,” he joked. “I’m sure she’s still controlling me and I’ve got notes in my pillowcases, on my sink, in my shaving thing. She’s still telling me what to wear.”

“She did it her way. There’s some things that they predicted that the doctors ended up saying, ‘We’ve never, ever, seen anything like this,’” he shared. “Her way was to live. She wanted to live so bad and she fought so long, and the reason she fought, she liked life but she wanted to show people how to beat it and what to do when it got her.”

“One of the last things she said [was] ‘It’s a test of my faith,’” he continued. “She had faith and that was it. There’s things you go through when you’re dying, like steps like you do when you lose someone, right? You get mad at them, and then you go through all these steps.”

“Well, the last step when you’re dying is to accept it,” he added. “And she said to me the other day, ‘Honey, that last step, I ain’t taking…’ So go Bethy.”

Despite Beth’s determination, Dog said he knew this day would eventually come. Still, he said, it didn’t make it any easier.

“It came very unexpected, really fast,” he explained. “All of her clothes were exactly where they were, her makeup, everything. We didn’t prepare.”

“It’s just incredible when you walk alone in the bedroom and you’re there and she was there two days ago,” he tearfully told reporters.

And as the Chapman family continues to mourn the loss of their wife and mother, Dog said he is turning to his religion to help him cope.

“I loved her so much,” he shared. “As Lazarus lay, Jesus said he’s not dead, he’s sleepeth. My final words are Beth isn’t dead, she’s sleeping.”

“I hope to god there is a God. I trained myself [to think] ‘What would Jesus do?’ and I hope I’m not just talking to myself,” he added. “I hope there is a God and if there is, I’m gonna see my honey again. That’s all we can do is hope.”

Earlier on Wednesday, Dog revealed that Beth had died at age 51 after a valiant battle with cancer.

“It’s 5:32 in Hawaii, this is the time she would wake up to go hike Koko Head mountain,” he tweeted. “Only today, she hiked the stairway to heaven. We all love you, Beth. See you on the other side.”

A rep for the Chapmans also told PEOPLE, “Beth died at 5:32 this morning, the same time she would wake up to go hiking Koko Head. The exact same time. She was surrounded by family and Dog was there, holding her hand.”

News of her death came after Dog revealed that Beth was admitted to Hawaii’s Queen’s Medical Center on June 22.

In November 2018, Dog that she was “not doing well.” Days before his comment, PEOPLE confirmed Beth had been hospitalized in Los Angeles for emergency surgery to clear a throat blockage that was obstructing her airways.

The Chapmans first opened up about Beth’s illness in September 2017 when they publicly announced her stage II throat cancer diagnosis.

Talking to PEOPLE about her diagnosis and cancer journey in November 2017, Beth was determined to keep a positive attitude.

“I knew I couldn’t let it take me over,” she said. “I had to keep moving, every day, moving forward. That’s all you can do when you get a diagnosis like this. So I take it each day at a time. And I’ll fight it with all that I have.”

Beth underwent surgery to remove the tumor from her throat, but the recovery was tough. The couple told PEOPLE that they were making it through the dark time together.

“I take it one day at a time. And I believe in the power of prayer,” Beth said, while husband Dog added, “She’s very tough, and she can beat this.”

The Chapman family plans on holding two memorial services for Beth — one in Hawaii and one in Colorado — in the places where she lived and currently has family in.

At this time, no dates have been set but Beth’s children told Hawaii News Now that they would be announcing that information in the coming days.