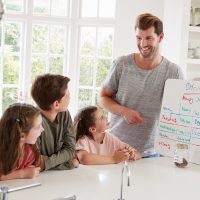 Getting your kids to do chores around the house is hard enough, but one woman has resorted to bribing her husband with beer and sex just to inspire him to pitch in.

In a post found on Reddit’s Feminism forum, a user shared an image of a hand-drawn diagram, commenting “sticker reward chore chart for dads? Really??”

The image shows a grid filled with Disney-themed stickers and doodles, with the title “Daddy’s Sticker Chart.” It lists seven different chore tasks with spaces for up to six stickers, indicating the chore has been completed, which then leads to big rewards.

Duties outlined on the chart include “wash dishes,” earning dad a 12-pack of his favorite brew; “put toilet seat down” is rewarded with “no nagging” for seven days; and “change blowout diaper” gets him a strip-tease show.

Even a grand prize “BJ!!” is performed for cleaning up baby’s throw-up.

The Reddit user who posted the image said it made them feel “sick.”

“It just doesn’t feel right to offer up sexual intimacy for housework or child care,” they wrote. “It also perpetuates the myth of the Incompetent Dad. Men don’t need a reward chore chart like this to participate in he routine of activities of daily living, do they?”

Some agreed, as one wrote, “Ick. If your husband is just another child to you, you should not be with him.”

Unsurprisingly, however, one guy praised the clever agreement.

“Maybe it’s just because I am male and lazy, but this seems like a really good idea,” he commented. “I am guilty of not doing the chores, I am also guilty of loving BJs, so I think if there is a way to get one by doing extra around the house, then I think it’s a great idea.”

Another proudly claimed that his girlfriend wouldn’t be able to keep up her end of the bargain — because he’s just that helpful.

“I don’t think I’d be able to drink fast enough to keep up with the dishes reward,” he said. “I constantly do the dishes.”