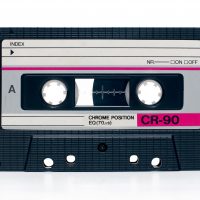 The production of cassette tapes has temporarily been delayed due to a global shortage of the materials used to make them.

Despite being technologically outdated, a BPI (British Phonographic Industry) report earlier this year revealed that a cassette tape resurgence was taking place as nearly 35,000 cassette tapes were sold in the UK for the first half of 2019.

When it came to artists proving successful on tape, Billie Eilish has secured the top spot – selling 4,000 copies of her debut album When We Fall Asleep, Where Do We Go?

It was followed by Catfish and The Bottlemen’s The Balance at 2 on 3,000 cassette sales, with Madonna’s Madame X at no.3, Lewis Capaldi’s Divinely Uninspired To A Hellish Extent at four and Hozier’s Wasteland Baby completing the top five.

However, while the growing demand has been great for business it has also resulted in production delays due to a shortage of gamma ferric oxide, a material used in magnetic recording tape.

Writing a letter to customers, the National Audio Company, the largest audio cassette tape manufacturer in the US, explained the sole factory that refines the precious material has been under construction for most of the year, leaving them with substantially smaller shipments and a growing backlog of unfinished cassette tapes.

“As you may be aware, there is a world-wide shortage of high-grade gamma ferric oxide; the magnetic material used in making professional quality audio recording tape,” the NAC’s letter began, before explaining what this means for their business.

Production can expect to resume later in the year. “THERE IS GOOD NEWS!” the NAC revealed. “We have been notified that NAC will receive at least eleven tons of oxide in October.”
Meanwhile, Vinyl is set to outsell CDs for the first time since 1986, a new report reveals.
The revelation comes in a mid-year report from the Recording Industry Association of America. Last year’s RIAA report revealed that CD sales are dying three times as fast as vinyl sales are growing, and it’s more of the same in this year’s.