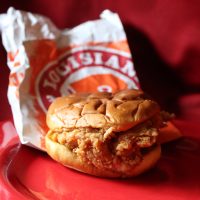 If you haven’t had a chance to try Popeyes’ new chicken sandwich, you’ll likely have to wait.

While there have been some reports of locations across the country selling out of the popular sandwich, now Popeyes says it expects to sell out  nationwide by the end of the week.

“The demand for the new Chicken Sandwich in the first few weeks following launch far exceeded our very optimistic expectations,” the chicken chain said in a statement sent to USA TODAY on Tuesday. “In fact, Popeyes aggressively forecasted demand through the end of September and has already sold through that inventory.”

In a tweet Tuesday, Popeyes wrote “Y’all. We love that you love The Sandwich. Unfortunately we’re sold out (for now).”

America’s best chicken sandwich: Is the winner of our poll, Popeyes or Chick-fil-A?

Chicken Sandwich War of 2019: Popeyes, Chick-fil-A and Wendy’s are clucking on social media

Popeyes said it is working with its suppliers to bring the sandwich back as soon as possible.

“How does a chicken restaurant run out of chicken? I’m taking my money & talent back to Chick-Fil-A,” Twitter user @yoyotrav wrote in response to Popeyes’ tweet. “They would never.”

Soon after Popeyes started selling the sandwich on Aug. 12, the battle lines were drawn over which chicken chain has the better chicken sandwich.

According to USA TODAY’s unscientific Chicken Sandwich Bracket Twitter poll, 54% of the 5,062 votes cast were for Atlanta-based Chick-fil-A and 46% for Popeyes Louisiana Kitchen.

Popeyes offered a way to find out when the sandwich will be available again.

Want to be first to know when it’s back? Download the Popeyes app and turn on push notifications.