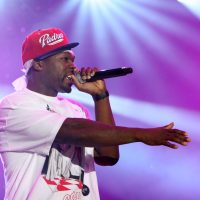 The Irishman has challenged the famous rapper to a celebrity fight after he poked fun at the MMA fighter in a series of Instagram memes.

Notorious may have thought he had found an ally in 50 Cent after the pair had struck a friendship during promotion of the Floyd Mayweather fight back in 2017, however, during McGregor’s arrest for attacking a bus filled with fighters, this was used by 50 Cent to mock the former champion.

An Instagram post likening him to Britney Spears, who infamously took aim at a paparazzi’s car with an umbrella in 2007, 50 Cent had superimposed McGregor onto the body of the famous singer during the umbrella attack.

After announcing his official UFC return in Moscow, when asked which celebrity he would like to fight, McGregor said: “I’d have to probably say 50 Cent, I’d like to fight him.

“Throughout the course of the Floyd Mayweather build-up I used him as a tool, a promotional tool on the free also, but then after that he began a little tirade against me on social media, particularly Instagram where he’d make these memes about me constantly.

“Every time I’d go onto the internet I’d see 50 Cent had posted up some new stupid meme and I wrote on one of the memes – old man on the internet making memes – and then he blocked me.

“So he’s had to block me, and I still see sometimes, I still get tagged in other people saying he’s saying this and he’s saying that.

50 Cent has yet to respond to the comments, but given both of their incredible wealth and influence, we could be in store for a few more rounds from both.