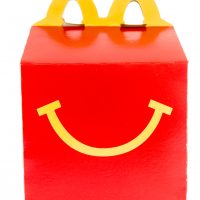 McDonald’s is bringing back some of the most popular Happy Meal toys to celebrate the 40th anniversary of its kids’ meals.

From Nov. 7-11, a special limited-edition Surprise Happy Meal will be available in more than 90 countries around the globe while supplies last.

“Since the Happy Meal was introduced on the menu, it quickly became synonymous with our brand,” McDonald’s CEO Steve Easterbrook said in a statement. “Today, this iconic red box creates lasting memories for billions of families annually across the world.”

The first McDonald’s kids’ meals were introduced in the U.S. in June 1979 as the Circus Wagon Happy Meal. Many of the early toys featured McDonald’s McDonaldland characters.

“Parents tell us how fondly they recall their favorite toys,” said Colin Mitchell, McDonald’s senior vice president, global marketing. “So, unboxing the Surprise Happy Meal together creates a real moment of bonding with their children. We hope these toys are something that they will treasure and remember.”

Between Nov. 7-11 while supplies last, the following toys will be in McDonald’s Happy Meals: