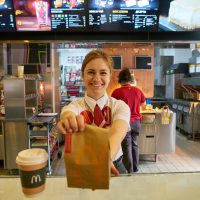 Steve Easterbrook has been fired as chief executive of McDonald’s, the fast-food chain announced on Sunday, after he engaged in a consensual relationship with an employee that violated company policy.

In a statement announcing the firing, McDonald’s said the company’s board had determined that Mr. Easterbrook had “demonstrated poor judgment.”

Mr. Easterbrook, who became the chief executive in March 2015, wrote an email to employees acknowledging the violation. “This was a mistake,” he wrote. “Given the values of the company, I agree with the board that it is time for me to move on.”

The board met on Friday and voted to fire Mr. Easterbrook after an investigation of his relationship with the employee, the company said. A McDonald’s spokeswoman declined to reveal more details about the relationship or to say when the board found out about it.

Mr. Easterbrook, who is divorced and has three daughters, will be replaced by Chris Kempczinski, who most recently served as president of McDonald’s USA.

A spokeswoman for Mr. Easterbrook, Desiree Moore, said he was “deeply grateful” for his time at McDonald’s and “acknowledges his error in judgment.”

Mr. Easterbrook, 52, had been widely credited with turning around McDonald’s after it posted one of its worst financial performances in years, in 2015. A native of Watford, England, who previously ran the company’s British business, Mr. Easterbrook emphasized technological innovation, striking food-delivery deals with the third-party apps Uber Eats and DoorDash and acquiring smaller companies that specialize in machine learning and artificial intelligence. Last year, Mr. Easterbrook was paid more than $15 million.

“There’s no question he’s been a very good C.E.O. during his time there,” said Jonathan Maze, the editor of the trade publication Restaurant Business.

“He really made that organization a lot leaner, they make decisions a lot more quickly,” Mr. Maze said. “They have gone from a company that was well behind on technology to one that is arguably at the forefront of things like artificial intelligence and delivery.”

Mr. Kempczinski will take over at a time when the broader fast-food industry faces significant headwinds, with Americans turning to healthier options and a tight labor market making hiring difficult.

“Casual dining has suffered, fast casual, upstarts that everybody fell in love with have struggled,” said John Hamburger, the editor of Franchise Times, another industry publication. “And McDonald’s seems like they’ve been pretty good at driving the business forward.”

Even as its business performance has improved, however, McDonald’s has faced criticism from labor advocates who argue that the chain’s low-wage workers, some of whom make less than $10 an hour, are mistreated and underpaid. Earlier this year, several Democratic presidential candidates joined striking workers demanding a $15 minimum wage, union rights and better protection from sexual harassment.

McDonald’s recently began offering new online and in-person training programs to its employees in the U.S. in an effort to combat workplace sexual harassment. But that step has not satisfied the company’s critics.

Tanya Harrell, a McDonald’s worker in New Orleans who has helped lead the campaign for a $15 minimum wage, said workers had filed dozens of complaints with McDonald’s demanding that the company take action to address sexual harassment. McDonald’s has ignored the demands, Ms. Harrell said, including requests to sit down with workers to discuss the issue.

“With the firing of Steve Easterbrook, we now know why,” she said. “It’s clear McDonald’s culture is rotten from top to bottom. McDonald’s needs to sit down with worker-survivors and put them at the center of any solution.”

As the chain has focused on delivery and other technological advances, it has also experienced friction in its relationship with its franchisees. An advocacy group representing McDonald’s franchisees, the National Owners Association, formed in 2018. A recent survey conducted by the group found that the majority of the 800 franchisees polled were not satisfied with the economics of online food delivery, in which the third-party apps take a sizable cut of each order. (Blake Casper, the chairman of the franchisee group, did not respond to a request for comment on Sunday night.)

Franchisees have also expressed concerns about the cost of upgrading restaurants to feature new drive-through technology as well as touch-screen kiosks that allow customers to order without waiting in line at the counter.

As the leader of the fast-food chain’s operations in the United States, Mr. Kempczinski has been at the front line of some of those brewing conflicts. “He’s had something of a controversial relationship with the company’s franchisees,” said Mr. Maze, the Restaurant Business editor.

Mr. Kempczinski, an avid marathon runner who is married with two children, joined McDonald’s in 2015. As an executive vice president at the company, he developed a strategic plan that company officials say has transformed the business, outlining the chain’s focus on digital technology and delivery.

“I’m happiest when I’m in our restaurants, visiting with franchisees, their crew and our customers,” Mr. Kempczinski said in an email to employees. “Yes, we serve delicious food and offer great experiences, but our brand means so much more. We stand for opportunity and empowerment for everyone.”

In the email, he also thanked Mr. Easterbrook for his contributions to McDonald’s, calling him a “patient and helpful mentor.”