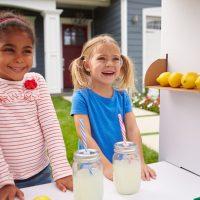 Democratic Gov. Tony Evers signed a dozen bills into law on Monday, including one that allows children to operate lemonade stands without a license.

The governor’s signatures bring the total number of laws he’s approved to 67, more than the 64 bills approved by former Republican Gov. Scott Walker by this time in 2017, the first year of the last legislative session.

One of the 12 relatively minor bills Evers approved on Monday legalizes children’s lemonade stands. Under the new law, anyone under the age of 18 is permitted to operate a lemonade stand on private property without a permit, as long as annual sales are less than $2,000 a year.

Evers also signed several other bills into law on Monday, ranging from one that requires builders to purchase wetland mitigation credits within the watershed they’re changing, and others meant to increase access to free and charitable clinics in Wisconsin.

The bill signings come amid relative gridlock between Democrats and Republicans preventing either party from moving forward with their signature platform issues.