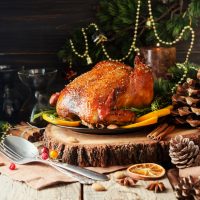 The World’s Most Expensive Thanksgiving Dinner Is $181,000

HIGHLIGHTS:  The world’s most expensive Thanksgiving dinner is served at a restaurant in New York . . . and it costs $181,000 for up to 12 people.  It includes, basically, the fanciest imported version of every Thanksgiving food possible . . . plus a cruise and Super Bowl tickets.

FULL STORY:  See, THIS is why people are going to riot over income inequality.  I’m out here driving to multiple grocery stores to save eight cents a pound on turkey . . . while other people are doing THIS.

The Old Homestead Steakhouse in New York City is serving the world’s most expensive Thanksgiving dinner tomorrow night . . . for $181,000.  So what do you get for that price?

4.  Gravy infused with a $3,650 bottle of Louis the Thirteenth cognac.

9.  Lots of expensive wines and champagnes.

The dinner serves up to 12 people . . . and the restaurant confirmed someone HAS bought the package.