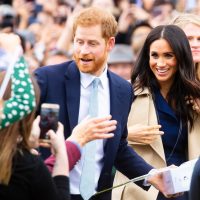 Get ready for some major royal tea to be spilled, y’all.

According to reports from Page Six, Meghan Markle and Prince Harry have agreed to a tell-all interview with CBS‘s Gayle King amid the fallout from their decision to step down as senior members of the Royal family!

As we reported earlier this week, the pair have decided to work on becoming “financially independent” while splitting their time and responsibilities between the U.K. and the U.S.

It doesn’t exactly come as a surprise to us that the seasoned TV host was tapped for the special sit-down.

Our readers may recall that King attended Meghan and Harry’s big wedding back in 2018 and she’s also pretty tight with Markle’s mom, Doria Ragland.

In a statement to the outlet, the 65-year-old offered kind words about the pair’s monumental political move:

“I care about them both and support whatever decision they make for their family.”

Ever since the couple made their big announcement, they’ve dominated headlines as the world scrambled to understand exactly how and why this separation would occur.

We’ve heard a change in Buckingham Palace staff led to too much conflict. We’ve heard they were going to be pushed out by Queen Elizabeth and were just leaving on their own terms. Our latest update came from a source who claimed the decision was made to protect baby Archie Harrison from a life of immense responsibility and relentless scrutiny from the British foreign press.

Hopefully, we’ll get all the context, juicy answers we need, and more when the Duke and Duchess of Sussex eventually sit down with Oprah Winfrey‘s BFF.

No word just yet on when their taped conversation will happen but we’re crossing our fingers it’s sooner rather than later!

With this recent news, we can’t help but be reminded of the last time Archie’s parents opened up to the press in their compelling ITV documentary, Harry & Meghan: An African Journey.

The piece focused on Meg and Harry’s tour of South Africa at the time — but also shed light on the struggles the couple have faced individually and together. Will we dive even deeper into this topic again, too?

It’s also worth noting that SussexRoyal.com has already attempted to answer a lot of our questions about #Megxit already but we’ll certainly be tuned in to whatever’s coming next!

Perezcious readers, got anything to say about all of this? Share your reactions with us in the comments section (below)…