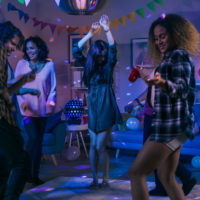 CHICAGO (CBS) — Police this weekend busted up rowdy house parties in Chicago this weekend, and said they were aware of video of one party went viral.

The violations of the stay-at-home order to fight the novel coronavirus came as Illinois reported 2,126 new COVID-19 cases and 59 new deaths Sunday.

As CBS 2’s Mike Puccinelli attended Gov. JB Pritzker’s 48th daily news conference on Sunday, and word of the parties did not exactly leave the governor in a festive mood.

“You can’t even move in this b***h!” someone was heard saying on the video.

Police earlier Sunday tweeted that they were aware of the video, but could not confirm where the party was.

“We are aware of a video circulating on social media depicting a large house party inside of an alleged Chicago residence. While we cannot authenticate the nature or location of the gathering, we want to remind everyone of the social distancing requirements in place,” police said in a tweet.

And it was clear what was on the mind of police officers when they broke up another large party on State Street in the South Loop on Friday night – an event that was caught on video.

Police came to the Carriage House Lofts, 1545 S. State St., after a resident said a fight left a hallway wall in the building stained with blood.

“There was fighting or shouting,” said Mandy Wilton. “It was absolute chaos and madness.”

Wilton said police were called to the scene on Saturday night as well.

She said the parties potentially put her at risk of contracting a disease that has already killed more than 55,000.

“I think it’s really irresponsible for people to be having events and parties like this when, you know, they could spread potentially coronavirus to you know unsuspecting individuals,” she said.

CBS 2 has reported on problems with parties at the Carriage House Lofts during the stay-at-home order before. Earlier this month, resident Christina Craven told CBS 2’s Charlie De Mar a bullet came through her living room floor from the unit below where a party was going on.

The bullet came just inches from the Cravens’ family pets, and feet from their young daughter’s bedroom.

A police dispatch call reported 20 people at the party earlier this month.

Management at the South State Street building said they have contact police, and they are trying to evict people from a couple of units. But that process is on hold due to COVID-19.

Police also responded to a party in the 700 block of East 79th Street on the city’s South Side. Police said officers came to the scene at 12:30 a.m., but it did not look like anyone was arrested or cited.

It was initially reported that was the party Purcell documented, but late Sunday, it was unclear if that was the case.

Gov. Pritzker hadn’t seen the videos when he went before the cameras on Sunday, but he clearly had heard about them.

“I want to remind everyone that by doing that – by standing together, not social distancing, many people not wearing masks – you’re literally putting everyone around you in danger – you are. They are putting you in danger. And more importantly, all of those people are putting their families and friends who are not there with them in danger,” Pritzker said.

Pritzker reminded everyone that COVID-19 is transmitted asymptomatically, and people who do not feel sick at all can still bring it home and give it to friends they see.

“The whole purpose of social distancing, of wearing masks, of staying at home, in fact, is that we don’t want to spread this to our loved ones or to others in the community, so I would suggest all of those people have violated not only the intention of the order that they put out, but they also violated the trust of their friends and family,” Pritzker said.

Pritzker was asked whether he thought violations of the stay-at-home order might rise due to fatigue with it, and if the state has a plan in place. He reminded the public that the state does have the ability to enforce the order – including the possibility of arrests and disorderly conduct charges.

“I have seen the video which shows what appears to be a house party taking place inside a Chicago residence. What was depicted on the video was reckless and utterly unacceptable,” Lightfoot tweeted. “While most Chicagoans are doing their part to prevent the spread of COVID-19, reckless actions like these threaten our public health and risk erasing the progress we have made. We will hold those responsible accountable. I am asking everyone to be in this together.”

She advised that anyone may submit a tip about house parties that are breaking social distancing and the stay-at-home order to CPDTIP.com.