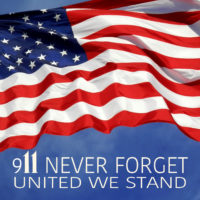 Two other suicide flights crashed at the Pentagon and in the woods of Pennsylvania.