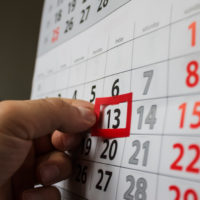 Picking up a penny and throwing spilt salt over a shoulder rank as Brits’ favourite superstitions.

Never walking over a crack in the pavement also ranked highly in a new study of 2,000 adults ahead of Friday 13.

The research revealed 62% would never walk under a ladder, while one in five would avoid walking over three drain covers in a row.

Opening an umbrella indoors is unthinkable for 46% who fear bad luck will come their way as a result.

Adam Vettese, from investment platform eToro, which commissioned the research, said: “While there’s many things people won’t do when it comes to superstitions, some rituals are used to bring about good luck.

“It’s been interesting to see how seriously they’re taken, and that some people feel it can impact anything from their personal life, to their finances.

“Numbers play a huge part in life, from lucky dates to figures to avoid – either way, they seem to impact our decision making.”

TOP TEN THINGS BRITS HAVE DONE DUE TO SUPERSTITIONS

1. Avoided walking under a ladder
2. Touched or knocked on wood to ward off something bad happening
3. Crossed their fingers
4. Blessed someone when they’ve sneezed
5. Not opened an umbrella inside
6. Picked up a penny
7. Avoided putting new shoes on a table
8. Broken the wishbone and made a wish
9. Thrown salt over their shoulder after spilling some
10. Not told anyone their birthday wish when blowing out candles

The study also found 46% touch wood and 41% would pick up a penny to improve their chances of good luck.

Just over a quarter of adults believe bad things have happened to them as a result of superstitions.

And 29% think they have been physically injured after forgetting to carry out their usual superstitious ritual, which includes falling over for one in five.

Nearly a quarter also believe they have suffered financially because they didn’t follow a superstition, although more than one in five think they’ve ended up better off.

It also emerged that of the 36% who have a lucky number, 71% look to incorporate it into any financial decisions they make.

But 51% would not invest money on Friday 13 for fear of losing their cash – and more than a quarter would avoid numbers involving 666 if they possibly can.

Adam Vettese added: “While some may scorn the idea of choosing to invest or not on a certain day based on a superstition or their horoscope, are they so different to established market practices such as ‘sell in May and go away’?

“We welcome anything that helps people feel more comfortable about engaging with their finances.”