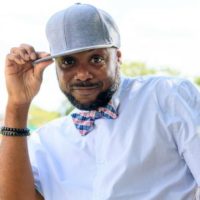 G!Nx is the first producer from Madison, WI to have major label placements.  Notably, one of the beats he wrote was purchased by Lloyd Banks of G-Unit, bringing the midwest sound into New York Hip Hop. The same beat later became the song “Karma” ft Avant, and went Platinum on the charts, solidifying G!nx as a certified national producer and inspiring youth for generations to come.

G!Nx produced for one of  the first Hip Hop groups in Madison – The Fresh Force, whose members included Johnny Winston Jr, Richard Henderson, Erin Hynum, Oren Ben-Ami and Emanuel Whitfield.  Fresh Force was signed to DJ International in 1990 and all members of the Force have continued to be strong, iconic, Black Men in the Madison Community.