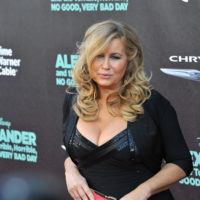 Jennifer Coolidge has had a lot of roles, but for some people, she’ll always be best-known as Stifler’s Mom from the “American Pie” movies.  And she’s okay with that.

Jennifer has an awesome, dead-pan sense of humor, and she’s surely joking about the number.  But it sounds like she IS serious about getting some action from playing Stifler’s Mom.