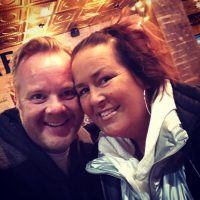 Connie and Fish met in college at Central Michigan University, in 1995. Connie worked for a local radio station as the “Night Chick” and Fish was a Wedding DJ there (LOL). They became friends, when Fish would call in to the radio station and do funny voices, while Connie was on the air.

Connie ended up moving to Omaha, NE and Fish followed shortly after and became her intern.  He went from her intern, to show Producer, to finally, her air partner. They moved around the country a lot back in those days – They went from: Small towns in Michigan to Omaha, NE – Jackson Mississippi – Madison & Milwaukee Wisconsin and Grand Rapids, Michigan.

Connie and Fish are both married (to Dan and Alicia, respectively) and each have a fur-baby. They’ve spent 18 out of the last 25 years as a team.

Steve is tired all the time and has learned how to function on no sleep. This is part of parenting and he is not a fan but sucks it up and does it. It got us all

What Question Did Your Kid Ask That Was Hard To Answer? – #TQOTD

The other day Steve was telling us a story of how Charlotte, his cute little 3 year old, walked in on him in the restroom and asked “what’s that?”. Wow … that would be an awkward conversation

If You Could Take A Road Trip With Someone Famous Who Would It Be? – #TQOTD

I don’t know about you but I could really use a road trip. Can you imagine if you could just pick up Aguilera, Reynolds or Downey JR and just drive around and have fun? I can. Let’s

What Did You Want To Be When You Grew Up VS What You Do Now? – #TQOTD

What Does Your Family Do That Is Bizarre? – #TQOTD

I remember why we did this Text Question of the Day. Connie and Steve were picking on me about my weird relationship with my Mum. She and I used to have what you call a unique bond.